This information is to help us prepare for their arrival and to support them as they begin a new journey of faith.  It can be downloaded as an A5 booklet here: Welcome-Gareth-Griffith-A5-booklet 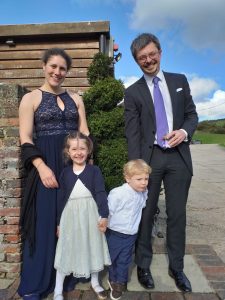 Gareth is married to Sonia, and they have two children: Myfanwy (6) and Vaughan (4). He grew up in Potters Bar, on the outskirts of London, worshipping in the local Methodist Church, where he first came to faith in Jesus. Gareth studied English Literature at Oxford, where he worshipped at St. Ebbe’s church, and was heavily involved in the college Christian Union and chapel. After leaving university, he went to work for a small Christian charity that did aid and development work in the former Soviet Union. After marrying Sonia, he moved to Cheltenham, then to London, then back to Cheltenham, for her work as a civil servant. Throughout this time, he was studying medieval literature at the University of Bristol, where he stayed to teach until 2019. During this time, he had particular responsibility for outreach to under-represented communities, and ran a degree programme for mature students who had no prior qualifications.

Gareth and Sonia have been blessed by being part of the church family at an FIEC church in Cheltenham, then at All Souls’ Langham Place, and then for ten years at St. Matthew’s, Cheltenham. A long-held suspicion that God might be calling him to ordination finally led to a selection panel in 2018, followed by two years training at Oak Hill College. Gareth and Sonia are both fans of old books and old films, old buildings and long walks. He’s on his own when it comes to watching the snooker.
Listen to Gareth himself telling you more – click here

What can we do to help support and train Gareth, our new curate?

A curate is placed in a training parish for two reasons:

Alongside this, the parish of Lechlade will pay Gareth’s expenses in full, and will also allow Gareth to develop and exercise his ministry throughout the 21 churches of the South Cotswolds Team Ministry and the wider Cirencester Deanery of which we are a part.

There are other things that, as a whole congregation, we can do that will play a vitally important part in Gareth’s training:

Pray that we all might be open to receiving and learning.

10 ‘Top Tips’ for supporting a Curate

A prayer for a Curacy

God of all wisdom, whose Son, Jesus Christ, calls us to be his disciples; form and teach us through the places and people to whom you call us.  Help us to learn from one another and from you, that we may grow in discipleship, serve your Church, and ever be renewed as ministers of your kingdom. We ask this in the name of Jesus Christ, our Teacher, Shepherd and Lord. Amen.

Almighty God, who by thy divine providence hast appointed divers Orders of Ministers in thy Church, and didst inspire thine Apostles to choose into the Order of Deacons the first Martyr Saint Stephen, with others: Mercifully behold these thy servants now called to the like office and administration; replenish them so with the truth of thy doctrine, and adorn them with innocency of life, that, both by word and good example, they may faithfully serve thee in this office, to the glory of thy Name, and the edification of thy Church; through the merits of our Saviour Jesus Christ, who liveth and reigneth with thee and the Holy Ghost, now and for ever. Amen.